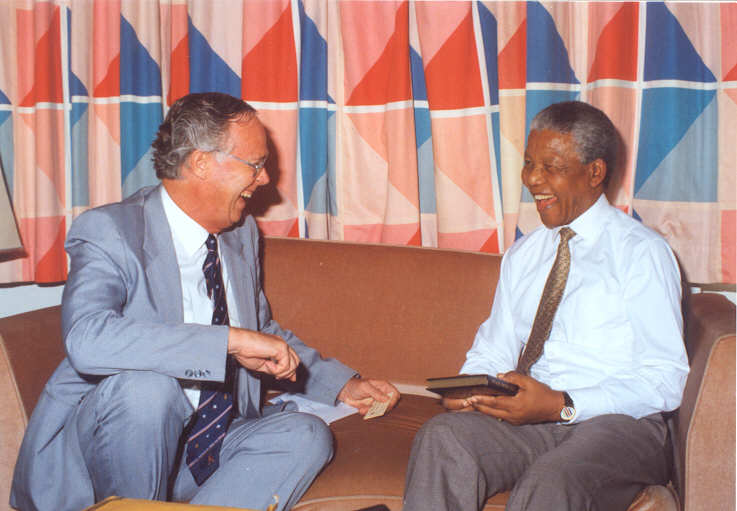 ‘…Marvelling at Mandela, and the spirit and humility of the man…’ – Michael Cassidy reflects on one of his meetings with South Africa’s first democratic president.

18th of July, Nelson Mandela’s birthday, is celebrated internationally each year, to honour the legacy of this great leader. Nelson Rolihlahla Mandela, also affectionately known by his clan name, Madiba, was elected as president in South Africa’s first fully representative democratic election, in 1994.

After 27 years of imprisonment by the apartheid government, with its institutionalised racism, Nelson Mandela chose to lead South Africa’s new coalition government, and the nation, in reconciliation. Declining a second term as president, he then chose to focus on philanthropy rather than politics.

AE founder Michael Cassidy, in his autobiography, ‘Footprints in the African Sand’, gives a fascinating account of South Africa in the 1990’s, and his encounters with Mandela at the time. He recalls his sense of awe at meeting Mr Mandela, and Madiba’s teasing humour as he remarked to Michael: “I have heard good things of AE’s work. But perhaps they only tell me the good things!”

Michael reminisces on another meeting where he was able to give Mr Mandela one of Billy Graham’s books. Madiba, speaking of Billy Graham, remarked, “I was much touched by one of his sermons which I saw on television when I was in Pollsmoor Prison. In fact, you know, when I was on Robben Island I never missed a church service or Bible study and I appreciated very much my regular visits from a Dutch Reformed minister. I wanted to send a gift from me to his wife, and all I had was a guava from my breakfast that morning. So that’s what I gave. But when the wardens realised I was developing a friendship with this minister, they disallowed him from coming to see me. I thought that very sad.”

In 1994, Nelson Mandela was inaugurated as president following a peaceful national election that was deemed an absolute miracle. In 1996, when violence threatened to sabotage South Africa’s provincial elections, Madiba told Michael:

“You know, we politicians can’t fix this thing. That’s why we need you people and the Church to come to our aid and see what you can do.”

In remembering Madiba, we honour his legacy: humility, forgiveness and reconciliation. And the grace of our Lord Jesus Christ that makes us ministers of reconciliation too.

Blessed are those who hunger and thirst for righteousness, for they will be filled. (Matthew 5:6) A Hunger for the Word What struck me the first time I visited Kigali to teach PTC in 2015 was the hunger of the students for God. In a country where many crave physical...

Tamandani Nazimera, a phenomenal and passionate woman of faith, recently joined the team at AE Malawi in a voluntary capacity as Health Programs Officer. Originally from Blantyre, Tamandani studied nursing and midwifery at the University of Malawi. After working for...

Santino Yuot, a former refugee and leader in the South Sudanese community in Australia, has a passion for the gospel in his home country which has been enhanced by studies at Sydney Missionary and Bible College. AE provided funding towards Santino’s trip to his...