“His authority on earth allows us to dare to go to all the nations. His authority in heaven gives us our only hope of success. And His presence with us leaves us no other choice.” – John Stott

Back in the 70’s when Billy Graham started to travel internationally, he would come across many evangelicals but they were all disconnected from each other. Traveling, ministering and spreading the Gospel alone. This was a concern for Dr. Graham who knew that the spirit of humility, friendship, prayer and partnership will bring hope and strengthen one another on mission.

The Lausanne Movement was born, chaired by John Stott they organised the very first international congress on world evangelisation back in 1974. An astounding 2,400 participants from 150 nations gathered in Lausanne, Switzerland for the first event. AE’s founder, Michael Cassidy was part of the initial planning of the very first congress. Later he served on the advisory council and was the chair of the Mission Committee for the 3rd Lausanne Congress held in Cape Town in 2010. Cassidy also became an honorary chair of the Movement in 2012. 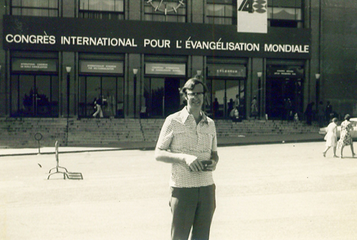 Michael Cassidy at the Lausanne Congress 1974

The Lausanne Covenant emerged from this first congress in 1974. This document defines what it means to be an evangelical. It is also a call to Christians to unite and spread the Gospel throughout the world. Many mission organisations, including African Enterprise, use The Lausanne Covenant as their statement of faith.

You can read The Covenant here.

“Throughout their lives, Billy Graham and John Stott gave peerless leadership to evangelicals around the world. We should not look for successors. Their joint work in establishing a movement that bound evangelistic passion with theological reflection, and orthodoxy with orthopraxy, has proven a watershed for evangelicals. To this day, world congresses, global gatherings, and issue-specific forums and consultations have continued to be convened in what Billy Graham called ‘the spirit of Lausanne’—a spirit of humility, friendship, prayer, study, partnership, and hope—the very spirit mirrored in his friendship with John Stott.” – Billy Graham and John Stott, A friendship of evangelistic passion and theological reflection, The Lausanne Movement

More on the AE team and their involvement in The Lausanne Movement:
Michael Cassidy
Stephen Mbogo
Emmanuel Kwizera