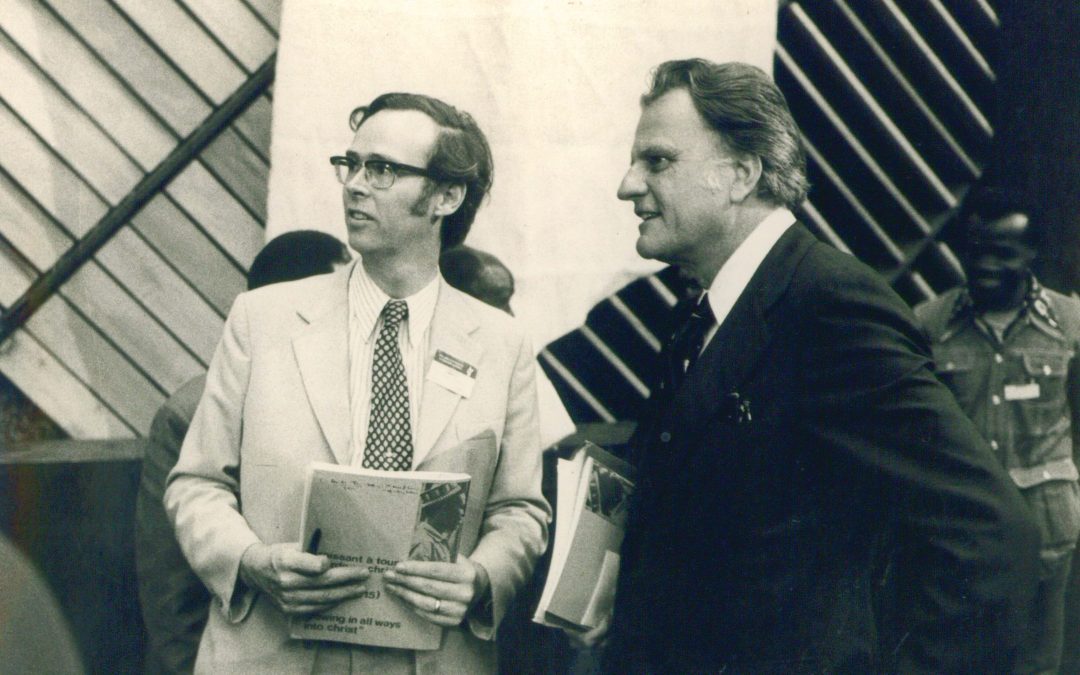 “The South African Congress on Mission and Evangelism in Durban in March 1973 was, I believe, a turning point both in our own ministry and for South Africa.” – Michael Cassidy

When AE invited Dr. Billy Graham as a guest speaker for the Mission Congress, there was a frenzy of interest from the South African public. The Congress was a landmark event in segregated South Africa, as Christian leaders of all races and denominations united in pursuit of true Gospel transformation.

On Saturday the 17th of March 1973, a large evangelistic rally was held at Durban’s Kings Park rugby stadium. A record audience of between 45,000 and 50,000 gathered that day. In a landmark moment for South Africa, a racially diverse, yet peaceful crowd had gathered publicly.

In his autobiography Footprints in the African Sand – My life & times*, Michael Cassidy reflects, “Here was South Africa as it should really be – a glorious kaleidoscope of racial beauty and diversity. In fact, never did the segregationist way seem more unnatural and grotesque than in those moments.” He goes on to describe the ripple effects that the rally had on the nation, “Newspaper banners screamed in hyperbole: ‘Apartheid Doomed’. Beyond that, multitudes in that stadium and around the country via the media caught a vision of what South Africa could become.”

Dr. Graham gave a simple Gospel message that day, followed by an invitation to accept Christ. More than 4,000 people surged forward. Counsellors struggled to provide follow-up booklets to all the new believers, many of whom were unable to get near the platform area.

“Blacks counselled Whites. Whites counselled Indians. Coloureds counselled Blacks. And so it went, for an hour or more, as the stadium slowly began to empty. This was South Africa. The Beloved Country. The country to weep for. And pray for. And work for. Here it was in an identity crisis, and trying to find itself. And here was the Spirit of Jesus on the job, proclaiming good news to the poor, release to the captives, recovery of sight to the blind, and liberty to those who are oppressed… Of course, history would prove that we still had a long way to go. But a start had been made.”

In reflecting on that day at Kings Park, Prince Mntambo, an African pastor, said,

“Black alone looks dull. White or yellow alone look pale and empty – but black, brown, yellow and white look like beautiful flowers planted by God. That was the beauty of Kings Park with Dr. Billy.”

Please pray for our upcoming missions across Africa and for the Gospel to reach those that have never heard it before.

*Footprints in the African Sand – My life and times (by Michael Cassidy) is available for purchase from AE Australia. Contact:ae@aeint.org

Do not let anyone look down on you because you are young, but set an example for the believers in speech, in conduct, in love, in faith, and in purity 1 Timothy 4:12 Foxfire teams are the youth arm of African Enterprise’s Evangelistic and Mission activities. Each...

My association with African Enterprise began after my twelve years of service with CMS in Tanzania and the Australian home base. Back again in parish ministry I met with people who had become very committed to a new kind of African ministry called African Enterprise....

My encounter with African Enterprise has been a blessing

Emmanuel Yeboah first joined the Ghana Street Children Apprenticeship Program in 2010 just after his mother passed away. Emmanuel had to resort to street trading in order to support his 3 siblings and was unable to finish school. Emmanuel heard about African...